When asked to recall the first time he heard Third World’s music, Damian “Junior Gong” Marley, who has known many of the legendary band’s members since he was a baby, briefly paused before 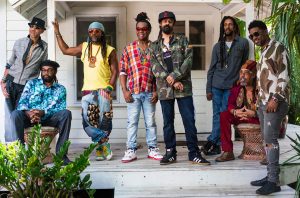 responding. “It’s hard to say the exact moment because I was so young,” Damian said, “but it must have been at Cat’s house (Third World guitarist/cellist/vocalist Stephen “Cat” Coore, the father of Shiah Coore, Damian’s lifelong friend and bassist in his band). I remember Cat would come home from the studio where he was working on an album and play the music, I remember seeing album covers, the plaques the band had received. Really, Third World’s music has had a presence throughout my whole life.”

For several years, Damian had wanted to produce an album for the band with the intent of introducing their music to a younger demographic. However, with their respective hectic schedules, finding a mutually convenient time frame to write and record proved somewhat challenging. But the outstanding result, More Work to Be Done (out on the Marley family’s Ghetto Youths International imprint), was well worth the wait. “Third World had many songs they were working on; because they are top-notch musicians, they were all good songs, but those songs wouldn’t have accomplished my goal of moving them into this new generation of music,” Damian, a four-time Grammy winner, told Billboard on the phone from his Miami studio. “We had discussions about re-approaching some of the songs, even the songwriting, so we almost started the album from scratch halfway through working on it. We had songwriting sessions together, came up with ideas and developed what was most attractive to us. That’s what you are hearing on the album.”

Downtown Palm Beach was all abuzz with festival activities. A favorite for South Floridians, SunFest draws all ages, races, and nationalities, men, women, kids, and millennials sporting the latest fashion trends. But it’s the music that brings them to the waterfront fest every year, for the five days of top names from all musical genres and the best in local talent. This Saturday drew me in with two acclaimed Reggae acts – Grammy-winner Damian “Jr. Gong” Marley, aka Zilla, and the Grammy-nominated Washington, DC-based band SOJA. END_OF_DOCUMENT_TOKEN_TO_BE_REPLACED