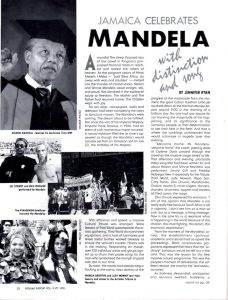 For 10 days, newspapers, radio and television had been trumpeting the news to Jamaica’s masses. The Mandela’s were coming! The dream about to be fulfilled. Not since the visit of his Imperial Majesty Emperor Haile Selassie, in 1966, had an event of such momentous import occurred. Unnatural mysticism filled the air since it appeared as though the Mandela’s would actually set foot on Jamaican soil on July 23, the birthday of His Majesty.  [Update: The Mandela’s arrived July 24 and stayed 24 hours] END_OF_DOCUMENT_TOKEN_TO_BE_REPLACED