(The links are to the artists featured in Reggae Trilogy: 200+ 80s & 90s Artist Headshots)
Story By R. Errol Lam

Even though the Reggae is still male-dominated, there are a large number of women performers who made their mark, especially over the past decade. Many are the more traditional singers, but DJs and Dub Poets have grown in number and popularity, not only in Jamaica but around the world. What follows here is a brief overview of some of these women. It’s obvious that we need more than one issue to cover the multitude of female talent in Reggae, but we wanted to start somewhere. So to all the Sistas & Dawtas who did not receive a mention here, please “feel no way.” You are important to us and certainly not overlooked. Just continue to be patient, and we’ll give you the time and space you so richly deserve. ~ The Editor 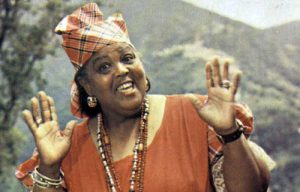 LOUISE BENNETT, affectionately known as Miss Lou, was born Louise Bennett Coverly in the 1920s. This beloved poetess made her Reggae debut on the Woman Talk: Caribbean Dub Poetry album (1986), produced by Mutabaruka. This endeavor is part of her work as a pioneer of people’s understanding and shows her appreciation of the unique culture of Jamaica. Her ever-present use of patois and the people’s language is clearly evident on the albums Color Bar and Dutty Tuff. Clearly, Miss Lou has earned the deep respect that goes with her label “Mother of Them All.” 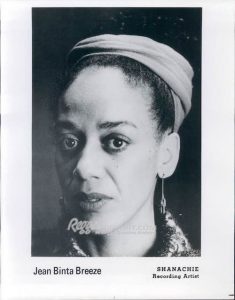 SISTER BREEZE, whose real name is Jean Binta Breeze, was born Jean Lumsden in Patty Hill, Hanover Parish, Jamaica. She is probably the best known of the female poets. Her Riddym Ravings (1987) was a ROIR cassette with the message of truths and rights. She was a performer at the 1983 Reggae Sunsplash, and her “Get Back Ya Slack” spoke for positive statements about women. Three other singles standout: “Aid Travels with a Bomb,” “Baby Mother,” and “To Plant.” She first came to the attention of Mutabaruka as “the first sister who wasn’t bringing me love poetry.” Sister Breeze emphasizes the power of the word, and works to use poetry “to show what is really happening… like a class, a different sort of teaching.”

LILLIAN ALLEN, born in Jamaica in 1952, is now well established and living in Toronto. Her best two albums are Revolutionary Tea Party (1986) and Conditions Critical (1988). She is a Dub Poet. Her recitation of words to Reggae accompaniment hits hard at social issues. She credits her two main influences as Oku Onoura, the Jamaican [poet] who coined the term ‘Dub Poetry’ and the female Canadian folksinger Ferron. Her songs range from “I Fight Back,” attacking the exploitation of Blacks in Toronto to “Birth Poem,” an almost vivid representation of the birth process (this is Lillian’s favorite.) She has won a Juno Award (Canada’s Grammy) and continues to sing in patois about struggle and oppression. Ms. Allen has a degree in English Literature and has published a book of poetry entitled Rhythm an’ Hardtimes. According to her, “…I love words…I wanted to create a world where I didn’t have to take somebody else’s journey.” Lillian, who is not a musician, has taken these words and fused them with Reggae music to become a powerful voice and presence. 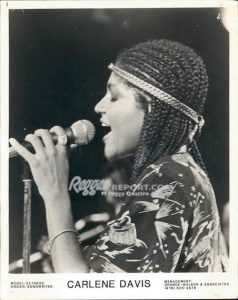 CARLENE DAVIS is a well-traveled Reggae singer (Europe, South America, U.S., Canada, Japan, and the Caribbean). This Reggae songbird was Jamaica’s 1982 Female Entertainer and Reggae Report’s 1983 Female Performer of the Year. She was born in 1953 in Jamaica, and first came to the public’s attention with the single “Stealing Love” in 1981. She has performed at Reggae Sunsplash in 1980 and 1988. In 1980, Carlene was one of the first females to have performed solo at Sunsplash. Her outstanding single “Winnie Mandela” stands out as a loving tribute to one of Africa’s genuine women leaders. Ms. Davis is one of Reggae’s best.

SOPHIA GEORGE is a young Jamaican songstress who is probably Reggae’s most dynamic and exciting performer. Her flamboyant 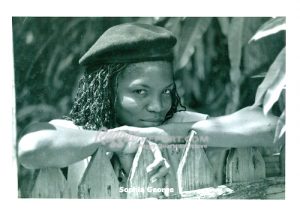 style and infectious smile connect her with the audience each and every time. Sophia’s constant invitation for audience participation is always accepted. She appeared at the 1989 Reggae Sunsplash and seems to be always on tour, noteworthy of which were the Reggae Sunsplash USA tours of the past few years. Her international hits “Girlie Girlie,” “Final Decision,” “Wanna Dance With You,” and the cover of “Sing Our Own Song” are big favorites of her audiences. Her awards include the Best Female Performer at the Canadian Reggae Music Awards. [She is] a beautiful and inspired singer.

GINGER, part of the duo called Rankin’ Scroo & Ginger, was born Lydia Sur in Hawaii. Since 1980, the duo has been in the San Francisco Bay area. They have released three albums, Thanks and Praises (1984), Dubwatch (1987), which won “Best Album 1987-Northern California Reggae Awards, and Cry Freedom (1990). Two singles, “Burden” (1986) hit the Jamaican charts and “Nuh Do Dat” (1988) hit the U.S. charts. Their combination of DJ and singing with conscious lyrics make this team one to watch out for.