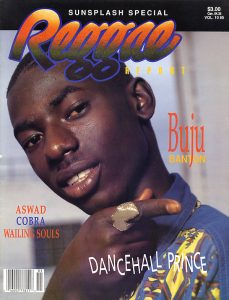 True, he doesn’t have anything like the striking bone structure of the man he’s compared to – Shabba Ranks (whom I shan’t even mention ‘cause the two are, according to Buju, ‘two different kekkle of fish’) – but his reassuringly gruff warmth is usually a little less (How shall we say it?) raw!

“… Buju nah stop cry fe all black woman, whole cup a t’ings a gwaan fe oonuh complexion…I am black, I am proud, follow Buju Banton and shout it out loud…Black will always stand out in a crowd….You’re like the silver lining behind the dark cloud.”

Choice lyrical lines from “Love Black Woman,” one of the current hits from Buju, a so-called peace offering for (and evens stronger follow-up to) the controversial but lyrically sharp “Love Mi Browning,” the massive Jamaican No. One single that put Buju Banton’s career on the front burner. 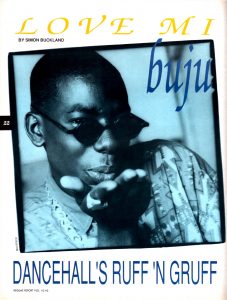 Yes, Buju Banton waxed lyrically and at length about the many virtues of one girlfriend in particular, a light-skinned girl, or “Browning,” as they are known in Jamaica – (it might not seem a proper thing in the U.S. or U.K. to express such things so bluntly, but here on our island in the sun, people and things are generally called by precisely what they are: hence, a white man is a “Whitey,” a one-armed or -legged person is “Oney,” and a fat person is inevitably “Bigga” or “Fatta”) – and he came under a lot of criticism for it.

Indeed, the song became the focus of much media attention in Jamaica – all of it fine, free publicity for a youth looking to make a name for himself in such a competitive biz. It definitely provoked a number of recorded responses, the most notorious of which was Nardo Ranks’ “Them a Bleach,” a ditty utilizing the “Bam-Bam” rhythm that directly lays the blame for the black girls trying to bleach their skin at the feet of Buju Banton.

Buju satisfied the critics by coming stronger the second time with “Love Black Woman,” using the same “Feeling Soul” rhythm track as “Browning.” I don’t think anybody noticed the difference between the two songs: the first was personal, about Buju’s girlfriend (I confess that the young Browning in question confided in me,) and the second was universal, about black women in general.

Buju says, “The stir over ‘Love Mi Browning’? Yeh, it caused a likkle conflick, when all I was doing was thinking like a man would, or a man should. But I quickly solved that problem, t’anks to the girls dem, and ‘nuff respeck to dem again!”

Signed to Penthouse, the same stable that houses Cutty Ranks, Tony Rebel, Wayne Wonder, and Marcia Griffiths, Buju has naturally cut out all the running around from producer to producer that is usually associated with new artists.

But you’ll continue to see releases from Buju outside of the Germain-run roster – songs recorded while he was up-and-coming, “out in the wilderness and looking food.” Up ‘til now they’ve only been issued here and there.

In the current U.K. Echoes Reggae Chart (June 13, 1992) only this year’s distinct duo flavor—Chaka Demus and Pliers—can almost rival Buju’s six hits in the Top 40 at one time. Alongside Buju’s Penthouse hits – “Love Mi Browning,” “Batty Rider,” and the latest “Woman Nah Fret” – a wicked next cut to “Nanny Goat” and Tony Rebel’s equally impressive “Chatty Chatty,” he nestles two from Techniques – “Stamina Daddy” and “Goldspoon,” and one from Soljie called “Move Your Body.”

Buju was attracted to the DJ biz since school days and was strongly influenced by then-successful local near-namesake Buru Banton. By the age of 13, Buju was already involved in the studio juggling and doing dance halls that is so much a part of every young Kingston hopeful’s life. Running with Rambo International, as an apprentice to the likes of Sanchez, Red Rose, Lizard, and Flourgon, he might get a chance on the mic at intermission.

The young Buju paid his dues before wedging into recording, first in a minor way on a track “The Ruler” in ‘85 for Robert French, and then in a firmer style with “Stamina” for Techniques’ Winston Riley. 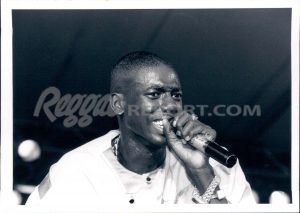 He continued to struggle around the various studios and producers, meeting mostly indifference (as is always the case until you ‘bus big,) until he got a boost by meeting Stumpy, an engineer who worked alongside the established in-house man at Germain’s studio, Dave Kelly. After an introductory ”Man Fe Dead,” the Penthouse crew struck red-hot with ”Love Mi Browning.”

Buju says, “Times there I was immature, now I’m moving up, ‘coming a man, so the vibes and the material now is different, y’unnerstan? If you listen the tracks from then and now, you’ll recognize the big difference.”

Unfortunately, a number of backbiters see Buju’s vocal progression (his tone on record has grown gruffer and more raw) as affected and unreal, as a mere copying of that other, better known international DJ superstar whom I promised not to mention earlier.

But I can testify to the fact the Buju talks the same way in person or on record, and if it was put on, he’d spend five days out of seven bathing and soothing his throat, okay?!

“…at his major debut performance at this year’s Border Clash …the stage was dripping with adoring fans…the frenzy caused a riot!

He also seems an agreeable youth, balancing a certain amount of posing with a lively sense of humor, evident in his lyrics. Cobra, a man who was unwillingly pitted against the Buju in a stage clash by Sting/Supreme promoter Isaiah Laing, has nothing but good words to say about his supposed ”rival.” Actually, most people reach the same conclusion: “A good yout’.”

Making the transition from sound/recording act to live performer is not always an easy one for many of the younger acts, but Buju had no problem, as his major debut performance at this year’s Border Clash showed. The stage was dripping with adoring fans and the frenzy caused a riot!

“Buju Banton laughs! A big t’ing, my debut ‘round town, for my fans to love me so much, who wanted to see me in action. Bwoy, the response was great,” boasts Buju.

“But I’ll tell you the truth. God knows, not even me expeck it! But God works, God work everytime. It’s like the producers, mi deh ‘mongst ‘nuff a dem, and dem try to abuse me recording-wise, and is like God show me that wasn’t the right camp for me. God a do it, y’know, believe me. In everything me say, God haf fi mention. Carry the name of the Lord everywhere.