Andrew Tosh, the eldest son of “Mystic Man” Peter Tosh, has become one of the most exciting youths to enter the 90s. With a musical style that emulates his father, not only in voice but in continually providing the youth of today with a message, Andrew has consistently proven that he not only has the sound of Peter Tosh but [also] an imagination and creativity that is purely his own. 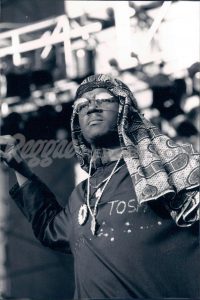 In the live performance, Peter’s voice clearly echoes from Andrew and his delivery of the standards can be positively spooky; there are comparisons between him and another Wailer son – Ziggy. On stage Andrew is vibrant and warm, energy flowing out of him at every move. With the competent backing of top drum and bass team Carlton “Santa” Davis and George “Fully” Fullwood, the able assistance of former Word Sound and Power/Soul Syndicate veteran Keith Sterling on keyboards, Tony Chin on rhythm guitar, and Vince Black, American newcomer on a hard lead guitar, Andrew Tosh has begun his career on a firm foundation.

The Family Tree
As the son of Peter Tosh and Shirley Livingston, Bunny Wailer Livingston’s sister, Andrew is connected to all of the Wailers. Bob Marley’s sister Pearl is Bunny and Shirley’s sister also. So, that makes Bob and Bunny his uncles (get it?) His growing years were heavily influenced by these relationships, instilling in him the thread of a vocal tapestry that is Andrew Tosh.

A serious musician with a playful outlook on life, Andrew travels the road with many instruments of knowledge and fun. Among other accouterments, he takes with him while touring the U.S., his soccer ball, keyboard, and a unicycle seem to be his favorite (Peter was quite good at riding the unicycle.) He keeps fit (he quit smoking ganja) and learns his music. He has been known to spontaneously work out arrangements for one of Peter’s songs he’s never sung during soundcheck, hours before the show, and performs it that night as if he’s done it all his life.

I interviewed Andrew after his performance at the Miami International Music Festival, at the beginning of a three-stop South Florida tour. We traveled with them for the next three days and I learned how serious this “Original Man” really is.

The Interview
Terri: How did you start out?

Andrew: I started playing piano in school, started writing one and two songs in school, and did my first song in 1985, “Vanity Love” for Charlie Chaplin on Neville Lee’s label. After my father died, I decided to take it a hundred percent serious, ‘cause they take his life.

TL: How old were you then?

AT: Twenty. I did my first album, Original Man, in 1988. The title for the album, I wrote that song as a tribute for my father. I started my debut U.S. tour in April of that year at the Starlight Amphitheater in L.A., as a tribute to my father, sponsored by Reggae Times. I have my second album out, Make Place for The Youth. Ten original tracks, one cover song – “Small Axe,” original Wailers.

TL: Obviously your father was a great influence on you growing up. Did he encourage your direction into music?

AT: Very much. When I was 14 my piano teacher said to me, “Andrew, you are the only one playing chords on this piano here. Why don’t you ask your father to get you a manuscript book and let me take it further?” So I went home that day and told Peter about it and he said, ‘Okay, I give you the money and you buy the book.’ He wanted me to play guitar first, but my head was where the piano was at, so it is the piano I gotta get. I am going to start my guitar lessons now though, I love it too. But my mind wasn’t there at that time when Peter said, ‘You got to learn the guitar, man.’ What’s inside of you is inside of you. What’s inside of the daddy is inside of the daddy and mommy, right? So, if it’s ordained for you to do that specific thing, it’s ordained. Nothing go above that, you know. It’s what the Father ordained, so no matter what you try, you can’t get over it. Just like man plan and the Almighty wipe out.

“The hair on your head don’t mean nothing to the Father. It’s the heart you got, that’s what you need, a clean hand and a pure heart.”

TL: Last time we spoke, you told me you follow the Rastafari belief. Does that still hold true for you?

AT: I am a Rasta. Give thanks and praises for that.

TL: Do you ever plan to grow locks?

AT: Probably for the future but not right now. Because I see a lot of wolf in sheep clothing out there. The hair on your head don’t mean nothing to the Father. It’s the heart you got, that’s what you need, a clean hand and a pure heart.

TL: Are you pleased with your label? [Tomato from Holland]

AT: Well, we just start some serious work now in terms of we’re supposed to finish the video for the title shot, “Make Place for the Youth.” As soon as that’s finished, we’ll head to Europe in November. [Watch the video at end of interview ↓]

TL: How’s the album been selling?

AT: Well, it’s just beginning to hit the markets here, but three-quarters of the people don’t know about it. Since January it has been available at Tower Records. [RAS Records is now distributing it.] 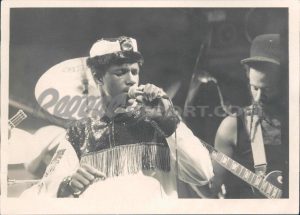 TL: How have the turnouts been for you when you perform in the U.S.?

AT: Approximately everywhere they accept me because my father opened that door, but I think they accept me for me. I am putting out my work, and not Peter’s work. Peter’s work is continued in me, but I can’t walk in Peter’s shoes. I must walk in mine, but I can walk on the road because he is my role model, he’s always been, even though he’s gone he’s still there for me.

TL: What are your plans for the future?

AT: My new album’s supposed to be started in a couple of months. I have so many tracks I want for the title shot, I haven’t decided which one it is yet, but we got the material.

TL: Three members of the band are from Peter’s group. Tell me about them.

AT: The foundation of Peter’s band was Keith Sterling and Robbie & Sly. George [Fully] Fullwood and Santa Davis joined the band in 81. They did 81, 82, and 83. They didn’t go on the road in 84. In 85, [Peter] was ready to hit the road but there was destruction and it never worked.

“Peter’s work is continued in me, but I can’t walk in Peter’s shoes. I must walk in mine, but I can walk on the road…”

TL: What is the message you have?

AT: I want the world to know that my father is gone, but his works carry on. I had to stand up stronger. My father was strong, he stood up for equal rights and justice, that’s the same thing I’m here for but I’m coming stronger. Trying to be there one hundred percent.

TL: Would you say you’re the toughest?

AT: I’m the toughest, the youngest as well, but I’m the “Original Man.” Peter Tosh is the “Mystic Man,” Andrew Tosh is the Original Man. My inspiration comes from the Almighty. I write songs from what the Father says. I got this song I wrote for Ziggy and I. It’s called “Oh, What a Reincarnation.” I’m not sure if I’m gonna do it on my new album but I’m gonna approach Ziggy with it; for him to put his verses on it so we can sing it together. Our generation blew up like a balloon. I didn’t know I’d be on stage today. When I was in school I was focusing on the next twenty years. 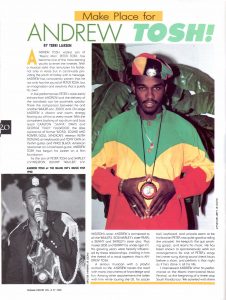 TL: When your father was killed, did you understand the motivation for what happened and what went down?

AT: I was conscious of it one hundred percent. I know my father’s message that he got for the world wasn’t just his message. I know there are evil forces and negative elements that want to try to cut him down, but he has gone to a better place, ‘cause the Father still lives, the Almighty Father.

Andrew’s video should be on MTV and other major networks by the time you read this. Andrew Tosh will be on tour in the U.S. in October, playing major colleges, universities, and clubs across the country. So make a place in your schedule to catch this talented youth!