David Hinds, central songwriter and lead singer, hails from Birmingham, England. His music has always been tinged with political opinions; he makes his stand in the name of justice. There are also spiritually uplifting songs and deep love songs. This year celebrates 30 years since the release of their first album, Handsworth Revolution, in 1978. David is eloquent, kind, and remains boyishly cute after all these years. Together with his associate, vocalist and keyboardist Selwyn Brown, they form the core of Steel Pulse. I caught up with David Hinds recently at the Malibu Inn. After a tightly packed show, he took time to answer a few questions. Here is my interview with David Hinds:

Jan: Tell us a little about your new DVD, Door of No Return.

David: It’s a DVD that’s a collection of inserts of different scenery, but the body of it was filmed some seven or eight years ago, when we made our first exodus to Senegal. There’s an island off the coast of Senegal called Gory, [where the Africans were shipped from to face slavery] and that’s what the video has been based on. Hence the term, door of no return.

“Chant a Psalm” was written about 1980. It was at a time when the band was at rock bottom…in regard to its career.”

David: I would say that my socially conscious or politically conscious age began when I was about fourteen years old. It was all to do with the “Free Angela Davis” campaign that was happening in England and throughout the United States’ black community… and, the actual incarceration of George Jackson and the killing of his brother, Jonathan Jackson, who was trying to free him at the time, from the courthouse. I think that is when I got introduced into the whole realm of being politically active.

Jan: You are also known for such beautiful spiritual songs as “Chant a Psalm a Day.” At what point did you reach this kind of enlightenment?

David: “Chant a Psalm” was written about 1980. It was at a time when the band was at rock bottom…in regard to its career. We had teamed up with Island (Records) two to three years before that. Then, all of a sudden, we lost the contract with Island. It was our first time venturing into the United States; also, certain band members within our infrastructure were going through a lot of domestic problems at the time. So, with that, and not having the second half of your corner to help you sort through your problems when you’re out on the streets…it brought about the whole aspect of putting a song together that’s all about praising God and having something that can [act] as a ritual to help you go through a positive day.

Jan: What kind of music do you listen to when you are on your own?

David: I listen to all kinds of music. You would be surprised what I listen to.

Jan: What was the last CD you bought?

David: The last CD I got…what I literally bought in my hand was a Reggae CD. I think it was Stephen Marley’s Mind Control album. I think it is a very vibrant album. It didn’t hit me at first. That was the strange thing about the album, it never grabbed me at all initially. But, after the third, fourth listening…I think it is one of the best albums that’s out there on the market right now. It’s very underestimated because of the nature of the music…which, well you know, when it comes to the acts that are out there…the ones that are making it in the mainstream…your Sean Paul’s and your Shaggy’s…I think Mind Control is a very technical album. I think it is something that is a spin-off and [in the] progressive direction, as what Bob Marley would be doing, in so many different ways. I think all the sons, as a matter of fact, are contributing in a very big way towards how the music should be going, as far as I’m concerned.

David: There’s an artist called Umojah that was passed on to me by one of my associates here within the camp, Rootsman Kelly, which is a new act out there trying to penetrate his Reggae vibe. I don’t know much about him. This is what I’m trying to say to you. I listen to unknown acts and I listen to people who are up there. Then I go diverse and I start listening to guys like Papoose and 50 Cent. Trust me, you nuh. I just jump from different artists to different artists.

Jan: What makes you happy?

Jan: What would be a perfect day for you?

David: I find is a perfect day is when I manage to get through all the chores that I’ve written down the night before, which includes if I can get a nice song written or half-written. I think that becomes a perfect day for me because that gives me my greatest high of all… when I have a song that I know is really in the pocket. It just gives me a buzz that nothing else does…to be honest with you.

I don’t like putting dumb lyrics together. I like something that is constructive and has meaning to it. It makes me feel good about what I do…

Jan: Is there a new album in the works that we can look forward to?

David: There is a new album in the works. as far as being written. The other band members haven’t heard any of the tracks as yet. We’re putting ideas down, we’re putting subject matters together. I don’t like throwing any old song out there. I don’t like throwing any old groove out there. That’s one of the reasons why the band takes such a long time to put music out. ‘Cause once we put it out, then it’s the whole idea of touring for quite a long while. ‘Cause that’s what usually happens. I don’t like putting dumb lyrics together. I like something that is constructive and has meaning to it. It makes me feel good about what I do, and I think it pays off when I see people come back and compliment the bands’ legacy.

Jan: Yes, I think your work is brilliant.

David: Thank you very much. We’re absolutely jet-lagged right now. I’m talking to you on auto-pilot.

Jan: Thank you very much for the interview. I bought the DVD and look forward to watching it.

David: There’s another DVD that’s coming out shortly. It’s gonna be in two parts basically. It’s a show that we did in Anguilla, which commemorates the 30th anniversary since Handsworth Revolution. We’re also putting together a DVD that is a documentary of the video of the Door Of No Return video that we did in Senegal. We actually did a video for the song itself. What’s going to encompass that video is a history of the band, which has never been out there before. Told in our version, as opposed to anybody else’s point of view of what happened. Also, all the little things that we participated in…such as the punk rock era. We are just gonna be digging up old footage, and amalgamate it with new footage and put it out there. So, you should be looking forward to that one as well. There’s not a title for it as yet…but it’s gonna be out there shortly.

“We want people, and especially our fans, to be supportive of that particular organization. It’s UFFA…that’s U-F-F-A…United Front For Africa.”

Jan: Oh, that’s great! Do you have any particular message that you’d like to give your fans or your readers?

David: Yeah, we are going to be vamping up our website. We’re not happy with the way it is at the moment. Never been actually, but we’ve never had the time to address it, now we’re finding the time. We want to also launch an organization that we are putting together, via the sales of our merchandise…and that’s called UFFA…United Front For Africa. It has to do with raising and distributing the funds in various parts of Africa, which need that kind of money. It might sound like an old story but it does ring true. It’s all about offering as little as you can or as much as you can. Either which way of what you can afford. You would be surprised that little can do so much. Like the purchasing of mosquito nets, for example. And any other kind of medicine. Mosquito nets work out to about eight dollars each, which saves a life, and it minimizes the whole spread of malaria. It doesn’t cure it but its gonna minimize it until there’s actually a cure and a treatment. Haffi clean up the polluted and stagnant water that’s out there. So, these are the things we want you to know about when it comes to launching the new website. We want people, and especially our fans, to be supportive of that particular organization. It’s UFFA…that’s U-F-F-A…United Front For Africa.

Jan: Are there any songs from your vast repertoire that are favorites of yours?

David: Wow, there are so many favorite songs of mine. Sometimes I listen back to tracks like “ Nyabinghi Voyage,” “Door of No Return” …there are certain songs I can’t believe I wrote. Something possessed me at the time. I look back on it and I sort of wake up and realize …Hey, where did these lyrics come from? Those are the songs I feel pleased about. “Soldiers” is probably my all-time favorite. Obviously there’s “Rally Round”…there’s so many of them. “Drug Squad,” I like that. When it comes to songs, it’s not only the song itself…it’s how it comes into being in the first place. It had to be an excuse of some kind that brought that song into motion. I’m enjoying putting together the new sets of songs right now. Taking my time with it. See what happens. Let’s hope that the grooves are strong enough to stand up to what the songs are gonna contain.

Jan: Thank you so much for this wonderful interview and for taking time on your jet-lagged body to talk to us.

David: Thank you, as well, for all of the support you’ve given us over the years and all those wonderful photographs. I hope to be sifting through some of those for the new website. I’m telling you…I’m serious as a heart attack…Boo Boom!

To read more about Steel Pulse and their memorable performance at Kingston’s Superjam Fest in 1983, download this classic copy by clicking here! 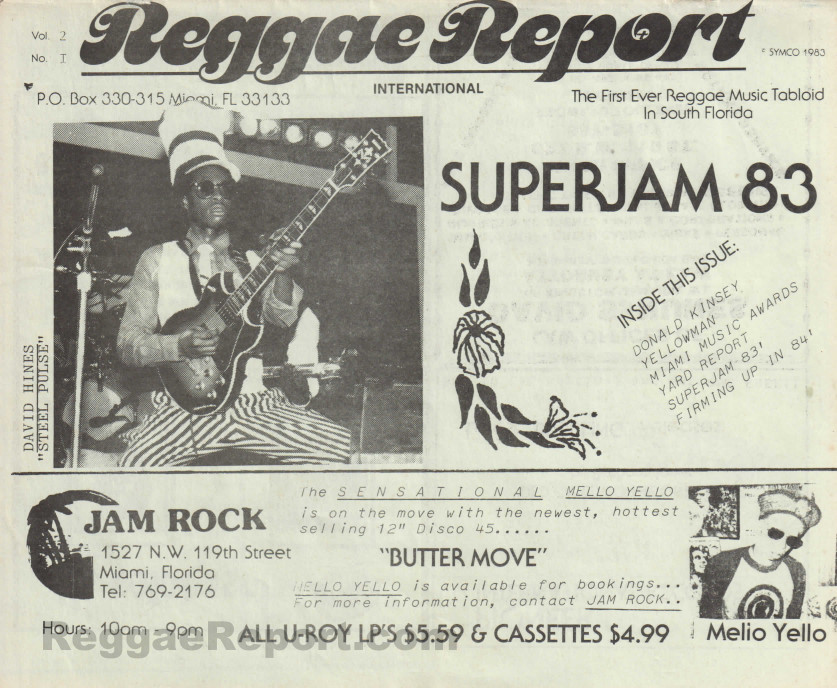