Singer/Poet Jah9, aka Janine Cunningham, was born May 23, 1983, in Montego Bay, Jamaica. She was raised in nearby Falmouth by a preacher father and singer mother. Her roots in Nina Simone and Billie Holiday are heard in her neo-soul-India-Arie-like, Jazzy, Dancehall, Dub-style delivery of self-penned poetic and powerful lyrics. Her stories surround Rastafari and Selassie, as well as the importance of yoga and women & children’s causes. 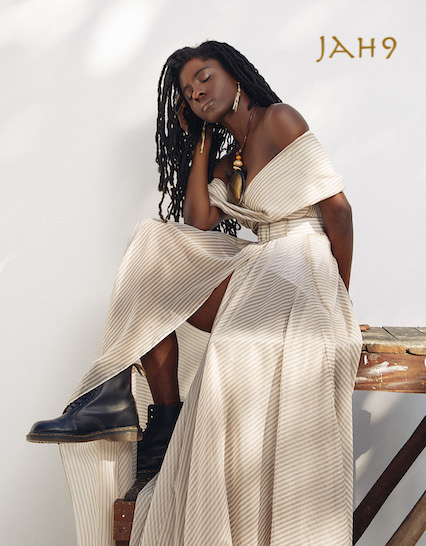 Jah9 is elegant yet casual, stylishly multi-ethnic and multi-cultural, always authentic, and considered by some an “unconventional Rasta woman” (due to her unapologetic repeated wearing of pants.) Her first LP, New Name, debuted in 2013, while the follow-up LP, simply entitled 9, peaked at #5 on Billboard’s 2016 Reggae Album Chart.

Jah9’s distinctive voice, lyrics, and delivery have revisited and re-energized the Conscious Rasta Reggae era of the ‘90s. However, the healing music offered in her third album release, 2020’s Note to Self, is what we need now. She co-produced this album along with Reggae pioneer Clive Hunt, a mix of “this “era producers Teflon, Romario “Runkus” Bennett, Iotosh Poyse, and Zinc Fence, and veteran engineer Errol Brown. Jah9 touches the unseen-only felt areas of life and body with her Spoken Word, Dancehall and dash of Hip-Hop style. In May 2020, when she was asked by High Times magazine about how she saw her evolution from the first two albums, Jah9 shared, “So, it was balancing with those [music industry] expectations while my true purpose stepped forward. I think that’s what this record is a reflection of. It’s me stepping into my purpose in an unapologetic way.”

The video for the title track presents Chronixx, 2020’s favorite Conscious singer/DJ, who penned his own verse for this song. They are long-time friends who have helped each other along the path to well-earned fame and recognition. The video is directed by Samo, and the result is a flawless, well-produced, shot, and edited story.

Watch the video “Note to Self (Okay)” here↓

Also o a certified multi-form yoga instructor, Jah9 was doing her first Yoga tour of Africa when the Coronavirus pandemic struck. After 10 weeks and counting, she is still there, in Tanzania, exploring, creating, and planning for the future. Stay tuned. Stay well.

For a look at early 90s women who blazed a trail for artists like Jah9, read our feature Sistas & Dawtas of the early ’90s from V9#3 1991, and here’s an in-depth look at the life and career of the late Garnet Silk, a shooting star in the Conscious DJ 1990’s era.