On Thursday, October 9, 1986, Rita Marley, member of the I-Three; [and] Ziggy, Cedella, and Steve Marley of the Melody Makers, hosted a press conference at their Marcus Garvey Drive head office to review their successful “Hey World” tour and discuss plans for the future.

The tour, which featured the Melody Makers, the I-Three, Nadine Sutherland, and the 809 Band, covered some 22 North American cities with a unique blend of Reggae tradition, experience and youth they will not forget for a long time to come.

One newspaper review, in fact, said that “he (Ziggy) and three acts from the Tuff Gong label… carried the people with them on a journey through the Reggae world, which the elder Marley carved for his own.”

This review supported Rita’s opinion that the tour “enabled us to see the continuation of Bob’s work and…the gap has been filled by our continuing that work…It was like the whole thing happening all over again,” she added.

…the tour enabled us to see the continuation of Bob’s work and…It was like the whole thing happening all over again,

Continuing Bob Marley’s work, to Rita, also means helping the under-privileged. To this end, she will in the near future be inviting leading local journalists and international recording artists to perform on a record album, sales from which will be used to assist poor children in Jamaica. “We are gearing toward setting up a Help the Children Fund not only in Jamaica,” declared Rita, “but Parson christen him pickney first… Ziggy was born in a little house in Trench Town; I’m coming right from the ghetto and when I look behind, there are hundreds behind me.” 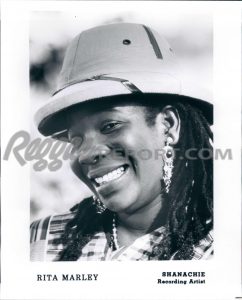 Rita went on to reveal that from the Help the Children Fund, she intends to go on to establish a school for Rastafari children, eventually assisting in taking them to Africa. “Repatriation is something I’ve been hearing about since I was 13,” she said, “and we must not sit down and wait for a big ship to come out of the sky. I’ve come to the realization that it is self-repatriation. You have to think and put action into it.”

…and we must not sit down and wait for a big ship to come out of the sky. I’ve come to the realization that it is self-repatriation…

On the “Hey World” tour, which Cedella Marley remarked was like “a month on a bus,” EMI Records signed a contract with the young group, Ziggy Marley & the Melody Makers, for seven years. Asked why Ziggy’s leadership role had been so underlined, “This happened naturally…it surfaced itself. A pace has been set by a leader, a prophet…and Ziggy sees what his work is cut out to be.”

The I-Three was also signed to EMI Records for seven years, starting with their album Beginning. Rita and Marcia Griffiths have also signed individual contracts with the company. The I-Three recently completed their latest single, which Rita announced is “an anti-drug protest.” Protest seems to be the order of the day because there is also a song on the Hey World album by Ziggy Marley & the Melody Makers called “Police Brutality.” However, with many years of music experience to her credit, Rita Marley observed that “when you get too eye-opening and conscious, it becomes dangerous, and I don’t want them coming after Ziggy yet!” Hey World is scheduled for local release on October 17.

Also on October 17,  Ziggy’s birthday, Tuff Gong will be releasing the new remixed Rebel Music album by Bob Marley, which is already on the Top 10 in the United States.

Asked how she copes with her hectic schedule, which includes being a manager, a mother, and an artist, Rita Marley replied, “I give thanks each morning and I am a very mentally alert person. I get up early in the morning and I jog and talk to the morning. I love nature and I love life.”