Do you know the name Tanya Stephens? Well, if you don’t, you soon will. She’s Dancehall’s latest singing sensation, and her advent to the dance halls couldn’t be more timely as there is such a dearth of female talent in this sphere of music. 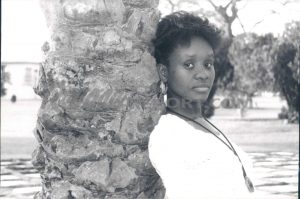 Born July 2, 1973, in rural St. Mary, Jamaica, Tanya is only 20, but she’ll quickly tell you that she’s got about 50 years of maturity to her credit. That’s very possible, given the mature songs she’s been mesmerizing the dance halls and airwaves with. In plain Jamaican terms, she have ‘nuff big chat fi her little size and age.

Think this is a joke? Check out these lyrics from her first hit, “Big Things a Gwan”: “Big things gwan fi yuh, Atlantic Ocean Tanya a cry. Big things a gwan fi yuh, make the rest a man dem look like dem nah try. Mi nuh wan hear nutten’ ‘bout nuh other man. Mi done decide mi haffi get dis one if me haffi pack an Uzi or pack a Mack 10 (a type of gun), if me even haffi bruck the 10 commandments.”

You thinks that’s wicked, check out “Kick Whey”: Kick whey! Stretch out yuh foot and kick whey’ cause yuh can do di work man. Kick whey Tanya sey yuh a hotness. Hoist your flag on mi property. Man strike your claim from early and make them know a yuh run it. No pirate can loot your booty.”

With these neat, sexual, suggestive innuendoes, Tanya is managing to attract attention, while retaining her pride and dignity. “I love to express my feelings and thoughts without being x-rated,” she explained. “I always try to record things everyone can listen to, including my family, who I never want to embarrass.”

I always try to record things everyone can listen to, including my family, who I never want to embarrass

Despite the sensitivity Tanya has toward her fans and family, the petite, slim, husky-voiced DJ is very rebellious by nature, and her forthright mannerisms and speech can’t be helped. “People don’t dictate the rules to live by; I do want I want to do,” she said.

Tanya, who records mostly on Barry O’Hare’s Ocho Rios-based X-Rated label, is a gifted songwriter, and already her talent seems to have been exploited with the successful take off of her “Big Things a Gwan” by Donovan Steele and Daddy Screw. How does she feel about this? “I write songs every day. I can write better songs than [Big Things s Gwan]. They can’t pirate everything I do.” 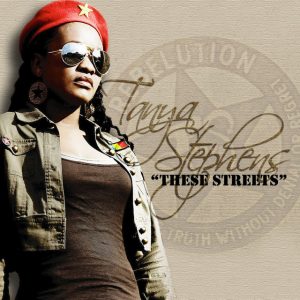 Extremely confident, Tanya knows she will make a big difference to the Dancehall scene. She tells why: “I believe in myself. I’m a very creative person, and I love to experiment with words.” However, Tanya doesn’t have her head in the clouds. “If you don’t have too many expectations, there won’t be too many disappointments. I want what everybody else wants, but too many impossible goals bring real devastating disappointment.”

I want what everybody else wants, but too many impossible goals bring real devastating disappointment.

Tanya’s first major show was in December at the White River Reggae Bash in Ocho Rios, Jamaica. She also opened for DJ sensation Spragga Benz at the Cactus Club in Kingston, Jamaica, on March 19. This was yet another fine performance, despite severe technical problems caused by the band’s faulty PA system.

At the rate Tanya’s popularity is increasing, it’s a safe bet that she’ll be on major shows like Sunsplash and Sting come later this year. She’ll, however, have to improve on her stage performance, an area in which she’s a little weak due basically to inexperience.

In the meantime, while other female singers seem to be sleeping, big things a gwan for Tanya Stephens. Hopefully, it’s just a matter of time before she kicks whey and makes music history as one of Dancehall’s most successful female singers.