Puma Jones  “It’s Only the Beginning…”

Puma Jones is the American-born female vocalist in the 1984/85 Grammy Award-winning trio Black Uhuru. One of the first women to break into Reggae’s “Big Time,” Puma proudly acknowledges her position as a forerunner in the recent surge of female recording artists filling international charts today.

Born in Columbia, South Carolina, on October 5, 1953, Puma migrated to New York in the ‘60s, where she grew up listening to Aretha Franklin and Dionne Warwick.

This early exposure to popular music soon had the young Puma desirous to be a singer. “Actually I wanted to be a Calypso singer when I was very young in age,” confesses Puma. She later did sing, performing solo and with groups as a teen. Now residing once again in New York, Puma is happily married and the mother of two young sons. 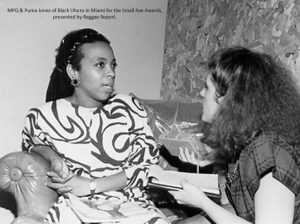 I asked Puma how she felt about the break-up of Black Uhuru and the loss of singer Michael Rose. “Disappointed,” she replied, “there was an objective that has not yet been fulfilled.” She hails the young Junior Reid as a “more than ample replacement…so we can continue on with our works.” Her feelings on the Grammy Award that Black Uhuru received is summed up in one word -“Rewarded.”

The new album arrangement with RAS Records is working out well. “They are very enthusiastic and positive.” A video for “Great Train Robbery,” their first of three albums with RAS, is presently out on the market. This album also features “City Vibes,” written by Puma and her first successful attempt at lead vocals. Puma confidently states, “it’s only the beginning.”

We talked awhile about the productivity of women in Reggae. “It’s a necessary move…because the balance has to be there.” “The woman’s struggle is an important struggle to address,” Puma continued. “The strength we need to guide our children, support our man(hood) is vital.” I heartily agreed to the point that we must all share to become “a very strong chain.”

“The woman’s struggle is an important struggle to address. The strength we need to guide our children, support our man(hood) is vital.”

While discussing tours (which Puma does plenty of) she emphatically states that London, all of Europe, has some of the most enthusiastic fans. “The rapport established with the audience is invigorating and presses you forward.” As for the United States, “the awareness has to come first.”

While discussing the growth of Reggae overall, Puma declares that an important area that is lacking is management, proper representation. “Your heart has to be into it. Where there is a will, there is a way, so I think they (the labels) have to develop the will.”

I am happy to report that Puma regularly reads the Reggae publications and affirmatively recognizes their impact. “I feel that where other promotions do not reach, the journalists do.”

The advice to aspiring young artists is “to achieve a clear focus (in order to) enter music on this level. You must be a well-rounded person and see if it is what is really right for you.” She adds positively, “If your talent, motivation and your initiative is really correct, then you’ll be there.”

“… advice to aspiring young artists: achieve a clear focus… enter music on this level. You must be well-rounded… and see if it is what is really right for you.”

Drugs in the industry, Puma avows, shows that people “lack a certain strength.” On late shows/no shows, her feelings are that there is a gap to be bridged between the buying market and the Jamaican talent and that “it’s not an easy one.” 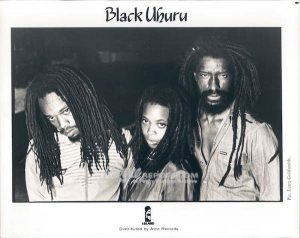 As for the future of Black Uhuru, “We have to be the impetus, (so) we have to work harder.”

Look for them to perform at [Reggae Report’s] “Small Axe” Music Awards on October 25 in Miami. Ducky Simpson, Puma Jones, and Junior Reid, collectively known as Black Uhuru, have been nominated in two categories – Best Performing Group and Best Singing Duo or Group.

When asked if there was a word to describe her haunting, unique vocal contribution to Black Uhuru, Puma quietly replies, “Yes, chanting.”

The future shines bright for Puma Jones as she devoutly and proudly carries the torch of music to light the way.