One of the most successful of these early producers was Sonia Pottinger, owner of the Gayfeet and High Note labels, possessor of a keen commercial sense and artist’s touch in the studio. Some of Reggae’s greatest songs were released on her label. Until recently, Pottinger’s reputation was in danger of disappearing. New anthologies of Pottinger productions on Heartbeat (Musical Feast) and Trojan (Put on Your Best Dress) join a few scattered tracks on anthologies, reissues of two of the Culture albums she produced, and some out-of-print Jamaican LPs, in a growing tribute to her talent

Pottinger began recording in the Ska era, but her productions resemble MOR ballads more than the uptempo music we associate with the early ‘60s. Perhaps her most notable song during this time was “Every Night,” a slow R&B ballad with a country & western lead guitar playing loudly in the foreground. “Every Night,” sung by Joe White and Chuck (Chuck has no last name), was a massive hit in both Jamaica and England. The song appears on The Trojan Story, an indispensable forty-eight-song anthology that chronicles the early development of Jamaican music. It can also be found on Time to Remember, a collection of slow songs by Joe White and a young Judy Mowatt, and others.

Pottinger came into her own during the Rock Steady era, and the two new collections both concentrate on the period between 1967-1970. Musical Feast is essentially an old High Note collection called Old Hits of the Past with six additional songs. It contains most of her really big hits, a few extras for spice, and excellent liner notes. Since it was created directly from the original masters, the sound quality is superb. Put on Your Best Dress preceded Musical Feast by a couple of months; only four songs overlap. Its sixteen songs were taken from records, not master tapes; therefore, the sound is occasionally a little weak. There are no liner notes.

Both records will delight listeners. If there is a Pottinger trademark, it is her ability to mold a catchy, good-feeling song with a timeless, classic feel. Unlike some of her contemporaries (and most producers today), Pottinger wasn’t terribly concerned with this week’s latest trend. She was not at the leading edge of musical innovation, but consistently made her way onto the charts. The music was designed to please the audience with its quality. She succeeded admirably on those terms.

Her earliest hits included “The Whip” by the Ethiopians, “ABC Rocksteady” and “Hard to Confess” by the Gaylads, and the brilliant “Swing and Dine” by the Melodians. The latter has an achingly beautiful melody anchored by one of the definitive Rock Steady bass lines. The Melodians, one of the great harmony groups, has never performed better than on “Swing and Dine.” On “Musical Feast,” the vocal is followed by a pretty Roland Alphonso sax version with nifty organ solos from Aubrey Adams.

“ABC Rocksteady” equally typifies Pottinger’s successes. The lyrics are nothing special, essentially a cross between a nursery rhyme and a standard party song, but the feeling that the Gaylads put into singing this nonsense is amazing. So is the sweetness of the melody and the drive of the bass and guitar, all of which made “ABC Rocksteady” a classic instead of a forgettable pop song.

Pottinger’s success with groups such as the Gaylads, Melodians, Ethiopians (“The Whip” is an extraordinary riddim that was revived during the “Boops” craze a few years back), Al & the Vibrators, and the Conquerors (Won’t You Come Home Now”) was matched by her skill in producing singers. Delano Stewart, one of the Gaylads, made several wonderful solo records on Gayfeet, including “That’s Life,” “The Riddle,” and “Stay a Little Bit Longer.” Ken Boothe recorded for High Note at about the same time that he was topping the English Pop charts with “Everything I Own.” Pottinger also produced exceptional work for Errol Dunkley and Judy Mowatt, who recorded under the name Juliann to protect herself from a contractual dispute.

During the seventies, it seems the quantity of Pottinger’s recordings declined as she concentrated more on the Treasure Isle (Duke Reid) catalog that she purchased and more selective productions. She recorded several singles and two LPs with Marcia Griffiths: Steppin’ Out of Babylon and Naturally, which, with several songs re-recorded from Griffiths’ Studio One days and new songs from Bob Marley, Bunny Wailer, and Bob Andy, is perhaps Griffiths’ greatest recording.

Pottinger also recorded three albums with Culture in the late seventies. Beginning with Harder Than the Best, an album that reprised many of the group’s Joe Gibbs hits, she gave the group plenty of room to record its intense Rasta Rockers music. “Cumbolo” and “International Herb” continued the series of high-quality music of one of the great Reggae trios and one of the leading groups of the militant era.

Little has been heard from Sonia Pottinger since her Culture records in the late seventies. Until Put on Your Best Dress in late 1990, there were no collections, no tributes and only one reissue, “Cumbolo,” in 1989. Perhaps now, with that record and Musical Feast, one of Reggae’s great historical figures will get the recognition she so richly deserves.

Update:  Feb. 23, 2020  Sonia Pottinger honored with a plaque on “Beat Street” in Kingston, Jamaica, for her contributions to Reggae music! 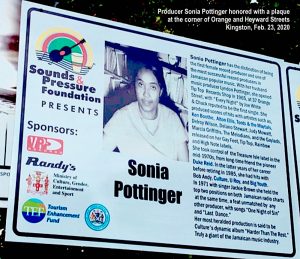