A Conversation with his Mother… Cedella Marley Booker

Bob Marley: The Legend Lives On

By M. Peggy Quattro
(RR Publisher MPQ shares her 1st interview with Ms. B at her home in 1984)
(A link to a portion of the interview audio is below!)

Walking around the grounds surrounding the great house in southwest Miami, you sense the peace and comfort Bob found there. MOTHER B, looking radiant and youthful following a loss of 60 odd pounds, cheerfully discusses her own interesting part in this lingering legend.

I listen attentively as MOTHER B proudly points to her growing garden explaining what is there… “there’s calaloo and sugar cane, a yam hill and pumpkin patch.” As she speaks you detect the knowledge, wisdom and love this woman has for the growing of food. And so it should be . . . as the daughter of a well-respected and gentle farmer, Mrs. B grew to learn and love planting and farming. Born and raised in St. Ann’s, a rural [Jamaican] parish, a youthful Cedella worked hard with her brothers and sisters in the field high up in the village of Rhoden Hall (Nine Mile). This is where BOB was born February 6, 1945, and it was at some point a few years later the two of them packed off for a new life “to town” (Kingston).

Bob (or NESTA as Mother B lovingly refers to her first born son) enjoyed the “very nice feeling working in the field … planting food, watching it grow… weeding the grass . . . (and) my father would always let me cook for them’.’

Being a spiritually strong woman, Mrs. B. would always love to sing and this she did regularly in church. With a voice as strong as her spirit, it’s no surprise that 8-year-old NESTA would join his mother in a burst of song. One of his favorites was a Gospel “I Went to the Garden Alone” by Pat Boone, and “and he loved to sing it!”

When asked how Bob was as a baby, MOTHER B replies seriously “I have seen Bob as a normal baby, just as any other baby. A good baby . . . he loved to smile … from the first Bob learn to smile til he last left here . The beauty ’bout it is to know that I was there when he come and I was there when he left.” With her own faint smile, MOTHER B continues “always a smile, never frown for long – him give me a good look and that frown break into a smile.” His father, Captain Norval Sinclair Marley, bestowed NESTA, a most interesting name, on his infant son. 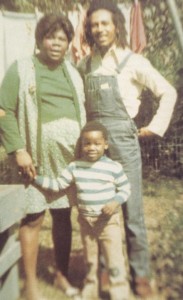 times forget … they stand up…change .. . the next time you say this child grow up so fast.” While Mrs. B was operating her own little “shop” providing basic staples, she learned of Nesta’s psychic abilities. “Bob read the palm. He’d look in your hand and tell you things. . . A few people had said that’.’ At first Mother B says she couldn’t believe it, then she continues “one lady said what the child told her happened.”  The story goes that after mother and son returned to Rhoden Hall from Kingston the same lady said “Nesta, read my hand fe me now” to which Bob replied “No, I don’ t read no more hand. I am a singer now.” Mother B sums up Bob as an “obedient, loving, understanding, respectful youth, someone the people just loved him because he was so pleasant.” It was in these early years that Bob’s close association with BUNNY LIVINGSTON WAILER began. School chums and pals, the two grew up as brothers.

The new life in Kingston began when Cedella and her teenage son, along with Bunny, left St. Ann’s. She remembers from their years in Trench Town, “he and Bunny were always rehearsing, singing, playing guitar.” Influenced by soul and American R&B she “knew he was doing something that made sense.” While BOB and Bunny were going to school, Mother B decided her youngster should have a trade, so off BOB went to learn welding. Following a freak accident involving his eye, that didn’t work out . . . “just wasn’t his calling.”

On his emergence into the professional musical arena MOTHER B recalls, “one Saturday a man come to the gate and blew his horn. He asked for Marley. I said he wasn’t there so he left his name, [Leslie Kong.] He said he wanted Bob to sign a con­tract to sing. They eventually met on the street, the man gave him some money when he signed this contract’.’ It wasn’t long before (1963) that Ms B heard his songs on the radio, “Judge Not,” “Simmer Down” and “Rude Boy,” …”long time songs he used to sing.”

It would be ten more years before BOB would reach international status, and Mother B had already gone on to live in Delaware, U.S.A. She was there when BOB signed his first deal with Island Records. He never talked too much business, but “I never heard no complaint’.”

Regarding the grueling road work, criss-crossing the entire planet, “the only thing BOB would have to express is [it is] HARD WORK. I’ve been on few [tours] with him and I see how hard it is…a lot of pressure and everything else … it’s hard work … hard work.”

As we talked about BOB’s tough “Tuff Gong ” image, Mother B explains “he was a father, brother, everything all together lovely.” If you need to be pampered, you get pampered . . . you need to be straightened out, you get . . . behind that, he’s as gentle as a lamb.”

[The conversation turned to Rasta] “One is born with Rasta, it’s in you … it manifests itself every day.”  With BOB it manifest “from the time he let the world know that HIM [Haile Selassie] is the Almighty.” BOB always felt Unity is strength … “that’s what he stands for…UNITY!!”

About the outgrowth from his movement with music, Mother B bubbles as she exclaims, ” BOB feels great . . . I see him smiling right now. He ‘s done his work, . . . it’s fulfilled . . . it have to feel good. I feel great!”

This is the legacy to carry on to the grandchildren. The music goes on forever . . . the legend lives on. 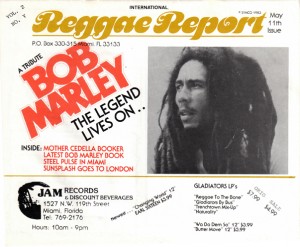