Downtown Palm Beach was all abuzz with festival activities. A favorite for South Floridians, SunFest draws all ages, races, and nationalities, men, women, kids, and millennials sporting the latest fashion trends. But it’s the music that brings them to the waterfront fest every year, for the five days of top names from all musical genres and the best in local talent. This Saturday drew me in with two acclaimed Reggae acts – Grammy-winner Damian “Jr. Gong” Marley, aka Zilla, and the Grammy-nominated Washington, DC-based band SOJA.

SOJA came on first and clearly had a great time. They went through their string of hits off their Born in Babylon, Strength to Survive, and the Grammy-nominated Amid the Noise and Haste albums. The diverse crowd was super enthusiastic and sang along with each song. Jacob Hemphill, the tall, talented lead vocalist, guitarist and founding member, led the band on a musical escapade with the audience. When bassist and founding member Bobby Lee let loose his long blonde locks, the crowd screamed with delight. The same when lead guitarist Trevor Young went down the ramp to dive into a sea of fans. The power of the horns and congas surfed its way through the crowd. The interaction between band and fan was totally visible, underscoring why this 8-piece powerhouse band draws huge crowds wherever they perform in the world.

When the whole band put instruments down to go all percussion, the crowd went wild. The driving rhythm section included congas, timbales, bass drums, claves, and whistles … and went on for what seemed like a very long time. It was totally amazing. The band was clearly having a grand time, as they didn’t want to leave the stage or their zealous fans. The super set ended with a shout out to DC-style Reggae with “I Believe” and an extended version of “Shadow.”

When Sky High, the perennial Marley family MC, bounced on stage, followed by the ever present Ites flag bearer, the audience knew it was show time for Damian. The youngest son of legendary Bob Marley arrived front stage wearing a cool button down blue shirt and welcoming smile, while his near-floor length locks went swinging to the driving beat. He begins with “More Justice” and continued with more off his hit albums Halfway Tree, Distant Relatives, and the Grammy-winning Welcome to Jamrock, a set that continued for 90 solid minutes. 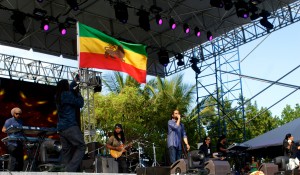 When Damian launched into a Bob Marley song – any Bob Marley song – the audience cheered and sang along. From “War” and “No More Trouble” to “Exodus” and “Get Up Stand Up,” Damian had the crowd in his pocket. We love how he treats his audience with respect, often taking time to say thank you and offering that inimitable Marley smile. Another highlight was a tribute to his “uncle,” the one and only Dennis Brown. When he launched into “Promised Land,” bringing forth the spirit of the Crown Prince of Reggae, he was introducing the legendary singer to many SunFest fans for the first time. Again, Damian shows respect for the great singers and entertainers who paved the way for him, his brothers, and all the young Reggae performers of today.

There are songs that reach heart to heart, and Damian’s “It Was Written” is one of them. Fans were swaying, singing along, hands in the air as if to capture the message in the “book of life.” The energy then switched to high gear with the mere beginning licks of his father’s “Could You Be Loved,” the 1980 Rastafari call to “love your brotherman.” Damian “Zilla” Marley seems most relatable to a new generation of Reggae fans, those freely accepting his teaching and preaching – proving “the fruit doesn’t fall far from the tree.” Roots!

The already amazing show was enhanced by the captivating video shown on three screens, on and at each side of the stage. The easterly breeze kept the red, green and gold flag flying high, waving the bold and beautiful Lion of Judah toward the audience. A truly powerful – and equally fun – performance by Zilla. But, when the young “Jr. Zilla” came out for a brief song with his beaming dad, the crowd went crazy. Already a star, Damian’s 5-year-old son Elijah is sure to keep the Marley fire burning.

In finale, Damian salutes his ocean of fans and presents the challenge to “take care of yourself and one another” before launching into a rousing rendition of “Jamrock.” Rastafari, indeed.