August 29, 2008 – London, England – A sparsely attended Forum in Kentish Town witnessed two veterans who have fought to stay current in an ever-changing reggae market. Former Black Uhuru singers Michael Rose and Junior Reid faced a tough assignment in a one-third capacity crowd wearied by an afternoon at the sound systems of Notting Hill, but their steely professionalism and refusal to let nostalgia rule made this a select gathering to remember. 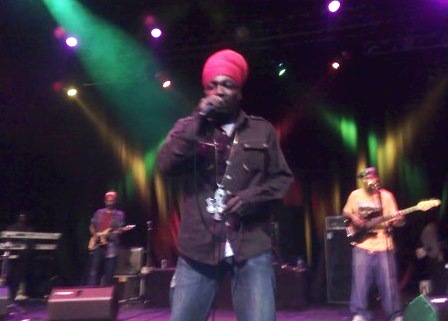 Despite being announced with little fanfare, Dawn Penn and the Righttrak Band dutifully warmed up the place; building to her smash hit “No No No.” Roots artist Iqula followed with a fiery set featuring an electric cello while clenching a red gold and green flag in his fist, exiting to the first hearty cheers.

Michael Rose and the Dubline Band took no chances making their entrance, starting with stripped down renditions of “Party Next Door,” “Sponji Reggae” and “I Love King Selassie,” furnished by tinkling piano and hard, reverberated snares.

Having catered to the Uhuru fans, he then pledged allegiance to present thinking by switching on the phase vocoder, bigging up dancehall producer John John and singing recent hits “Real Jamaicans” and “Waan The Herb.” Without respective counterparts Busy Signal or Alborosie, these duets did lose some of their impact while Michael’s love of call and response vocals meant he had to work the small crowd furiously to get what he wanted. Even so, this was an impressive showing from a man who in the face of changing fashions has refused to go away.

Performing in the UK after a six-year hiatus, Junior Reid has a similar disregard for the foibles of Father Time. Where he differed from Rose, who divided his time neatly between the old and the new, was in the way he and the One Blood Band moved seamlessly from one era or genre to another. He juggled classics such as “One Blood,” “Babylon Release The Chain” and “Foreign Mind” with modern “one drop” rhythms like “Dropleaf,” Spanish lyrics, even blending Rasta drums with otherwise straight hip-hop. As you would imagine from his Black Uhuru past, he showed no fear of singing others’ material, snatching vocal lines from Ini Kamoze, Jah Cure and Barrington Levy when the chosen rhythm tracks required. His set was near identical to the one he played two weeks previously at Reggae Sundance in the Netherlands, yet the difference in audience size didn’t seem to affect him at all.

Promoter Ras Lawi put on a commendable show, choosing a good sounding venue with a sensible smoking policy, while ensuring everything ran smoothly and on cue. The turnout may have been a little disappointing but these two fearless performers’ adaptability, strong vocals and determination to keep ahead of the game are the reasons why reggae continues to survive.