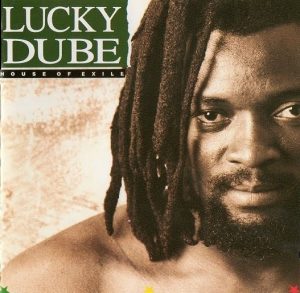 What follows below is the first announcement made on ReggaeReport.com. It was posted approx. 3 a.m. EST, after hearing the terrible news from our good friend, Lee Abel, who just happened to come across the news while on the internet. In the days that followed, the story – and our sadness – grew. There were men caught and arrested, a public memorial was held in Johannesburg, and Lucky was laid to rest in his homeland, the rural country that he loved, Natal. I will work to add more words here, as my friend’s story is one that needs to be told. Like one of his musician’s was quoted saying, “if Lucky Dube is not safe, none of us are safe.” Thank you for your patience.

It is with great sadness and pain that we report that South African Reggae star Lucky Dube was shot and killed in a Johannesburg suburb street attack late Thursday, police said.

The 43-year-old singer had dropped of his 15-year-old-son son at a family member’s house, and his 16-year-old daughter was in the car with him, in the Rosettenville district of Johannesburg, when he was approached by two or three youths in an apparent car-jacking. Lucky sped up to get away and was shot reportedly three times. He crashed into a tree and died on the scene.

South Africa’s Sapa news agency quoted police Captain Cheryl Engelbrecht as saying: ‘His son was already out of the car. When he saw what was happening, he ran to ask for help.’ The killers were still at large and the son too traumatized to provide police with any information, Engelbrecht added.

Melvin Khumalo from Gallo Records, Dube’s recording company, was unable to comment on the incident, saying the company was attending to Dube’s family

Lucky Dube was a fearless leader, respected writer, and beloved performer in South Africa, and throughout Africa and the world. His millions of fans are all in shock and feel deeply the loss of this prophetic and powerful, witty and wise man. Lucky recently returned home from touring to promote his 21st album entitled, Respect, released in April of this year.

Lucky and I go back more than twenty years and had both a business relationship and personal friendship. It’s sad to lose such a great friend and prophetic musician/writer/performer; so tragically and needlessly…over a car. How long will they kill our prophets? We can not just stand around and look. We must carry Lucky’s freedom song forward…he would have wanted that way. Never give up!