This debut album from Stephen “Ragga” Marley was well worth the wait. Nominated for the Reggae Grammy, to be presented on February 10, 2008, in Los Angeles, CA, Mind Control set the new standard in modern Reggae production.

Three-plus years in the making, we waited as Stephen produced Grammy-winning albums for his brother Damian. Now it is Stephen’s time to shine. I cannot stop talking about this CD. It is a fresh collection of new Reggae together with old-school, Hip-Hop, Latin and R&B, with a little Blues, Country and Roots thrown in. Each song takes you on a musical journey into the life and mind of Stephen Marley.

From the haunting intro of “Mind Control,” Stephen leads you down the road of mental slavery. With a call to free ourselves of this suppression, Stephen follows the path set up by his mentor and father. He says he did not sit down to write a political song; but what he depicts is what he sees, and if itís political, so be it.

He warns that today’s leaders offer the possibility of destroying one’s soul and corrupting one’s thoughts. With a call to wake up and raise our consciousness, not be fooled or victimized, he also states positively that the truth is out there for all to see.

Upon first hearing “Hey Baby,” I was touched by the kindness and sincerity of its story. My feeling was it was a love song. And it is. However, it was written for his children. A song he used to sing to them while on the road touring; now they consider it their song! Listeners can take what they want from it because the message is simply love. The addition of a two-year-old remixed rap by Brooklyn-based Hip-Hop star Mos Def adds “swagger,” as Stephen says, and adds to the uniqueness of the album.

The short comic interlude of “Officer Jimmy” sets up the next track, “Iron Bars.” Based on a 2002 unfortunate incident in a Tallahassee jail when Stephen and his brother Julian Marley were arrested for a small quantity of herb, this is the track where Stephen declares he is an “angry lion.” Julian adds a heartfelt verse, while NYC-born Hip-Hop artist Mr. Cheeks delivers a scathing view on the feelings that come with being locked up. JA Dancehall star Spragga Benz finishes with a bleeped-out call for “getting outta here.” Blaze it, indeed.

“Traffic Jam” features Damian “Jr. Gong” Marley DJing with a Hip-Hop feel. This also deals with the hassles of a traffic stop and being taken “dung a station,” maybe for having a nice car, rims, and jewelry (along with some ganja.) Stephen displays versatility by coming in with his Ragga-Dancehall style and fashion. This one is sure to be a hit with Damian’s fans and has the prospect of opening up a brand new market to Stephen’s great talent.

The vibe changes up with “Youíre Gonna Leave,” where Stephen openly exhibits genuineness. On this track, you can tell that he’s listening to his inner voice. You may think it is a girl speaking when actually a voice in Stephen’s head is heard speaking, admitting that he’s confused and going to leave his girl. A relationship that combines pleasure and pain (Sandpaper kisses, paper cut bliss, from Martina Topley-Bird lyrics) is sure to end. (Youíre gonna leave her/You have deceived her..ooh, just a girl). 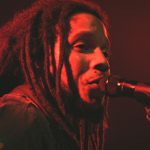 One of my favorites is “Chase Dem.” At first you think it’s Bob Marley and the Wailers. You will look at your music player, puzzled as Stephen delivers easy-skanking musical instructions for listeners to “run away politicians for their trickery and lies.” Definite shades of his father, from the message to the rhythm to the vocal touches. This is a great message song for Reggae dancing!

Next is “Lonely Avenue.” I loved this track right away. Then, I learned it is a classic written by Ray Charles! Now, given a distinct Bob Marley feel, this is another exposed chink in male armor. Stephen admits he is a huge fan and that this song — the only one not written by him — has numerous meanings, from the pain of interpersonal relationships to everyday youth struggles. (“Now, my room it’s got two windows, but sunshine never comes through/You know itís always dark and dreary since I broke off things with you — Someone help me, Lord”)

When the rhythmic “Let Her Dance” begins, you will once again do a double-take. Then you will succumb to the distinct Latin beat and driving Brazilian groove that forces you to get up and dance, dance, dance –cho! Another favorite of mine, this is sure to fill dance floors and be part of Latin dance/aerobic classes nationwide. Maya Azucena and Illestr8 provide additional vocals. Think Shakira, do the shimmy, and have a grand time! 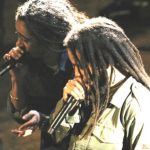 Yet another favorite is “Fed Up.” A flute-infused ode to possible lost love, Stephen sadly realizes because “he is too demanding” and plays silly games, his lady is fed up. Fine guitar work, both electric and acoustic, add to the sultry feel of this snare-driven, harmonic production. Although he voices doubt of finding this love again, regret for treating her this way, and realizing she’s fed up, there is still an indication that she won’t leave after all. (“Cuz you know I’ll still stay.”)

The final cut is “Inna di Red.” If you are like most non-Jamaicans, you will have no clue what this means. In Jamaican Patois, the yolk of an egg is referred to as red. This popular saying infers you are in the center of things, involved, not a bystander. This is where Rasta stands. Stephen declares Rasta as the center of things, a heavy responsibility where the burden may be eased with the roll of a spliff. From this Irie place, he is able to free himself from the pain of humankind, hate, and pray for Jah’s strength, love and grace. Red eye refers to envious people, the copycats (so to speak). Rasta proclaims that none of these shall escape Jah judgment. Rasta stands inna di red. Guitarist Ben Harper, who you can tell felt the intensity of this song, adds Bluesy-Roots style licks.

To reinforce this insight, the CD concludes with Bob Marley’s grandchildren singing: “So when we call him Rastafari, what shall we contend with — Heathen nah like Jah name,” followed by the sweetest laughter of a loving father.

An outstanding compilation of Reggae, Dancehall, Hip-Hop, Blues and Pop. An album that mixes Reggae melodies over Hip-Hop beats results in a new Marley standard. Stephen brings the generations together with his own words, music, and production. He provides a glimpse of what Bob Marley may have done in this time and space. This “angry lion” is certainly no copycat of his father.